I Used Facebook Without the Algorithm, and You Can Too

Facebook is broken, says whistleblower Frances Haugen, who worked on the company’s civic integrity team. In testimony before Congress and in the media, Haugen has argued that the social giant’s algorithms contribute to maladies that range from teen mental health issues to ethnic violence in Ethiopia. There’s no one solution that will fix all that’s wrong with Facebook—no, not even a new name—but one of Haugen’s suggestions stood out.

“I’m a strong proponent of chronological ranking, ordering by time with a little bit of spam demotion,” she told the Senate earlier this month. “We should have software that is human-scaled, where humans have conversations together, not computers facilitating who we get to hear from.”

Imagine that! Humans … having conversations … together. Haugen essentially recommends a Facebook News Feed where items appear as people post them, rather than in an order divined by the company’s algorithmic wizardry. In this world, likes and comments wouldn’t dictate what you see. It’s all a matter of timing—which would also prevent the algorithm from tossing logs onto the platform’s most inflammatory posts.

It’s not that radical a notion. Instagram only handed the algorithm the reins to your feed in 2016. Twitter took away chronology altogether that same year, only to reintroduce it as an option in 2018. And you can also ditch the algorithm in the Facebook News Feed right now, today. I know, because I’ve been doing it for the past two weeks.

In fairness, it’s not like Facebook hides the option. On desktop, you just click Most Recent in the lefthand pane. On mobile, you’ll find Most Recent under the hamburger menu in the upper-right corner. As Facebook itself warns, though, the experience is fleeting. “You can sort your News Feed to see recent posts,” a company help page says, “but News Feed will eventually return to its default setting.” (Or you can just use this link instead of facebook dot com, and load a ranking-free experience every time.)

To get a possibly obvious caveat out of the way: I am by no means a Facebook power user. I’ve posted three or four times a year since 2019, all of which were either WIRED stories or attempts to drum up business for my daughter’s Girl Scout cookie side hustle. My account is private, and while I’m somehow a member of 14 groups, more than half of those haven’t posted anything in the past year, I sporadically check in on three, and had forgotten the rest existed. Still, any honest accounting would put me on Facebook a few times a week. Call it force of habit, call it Marketplace voyeurism. Regardless, I am familiar with how the News Feed typically functions—and was struck by just how different an experience a healthy dose of chronology imparted.

I also don’t want to overstate things. The ills that Haugen proposes chronology may fix are largely not present in my social media bubble to begin with, at least that I’ve seen. Facebook also uses a multitude of algorithms; here it's referring only to the platform's News Feed ranking. And I hesitate to say whether the experience is necessarily better, at least for me, than what Facebook currently has on offer. Far more interesting, anyway, is what it says about Facebook itself. 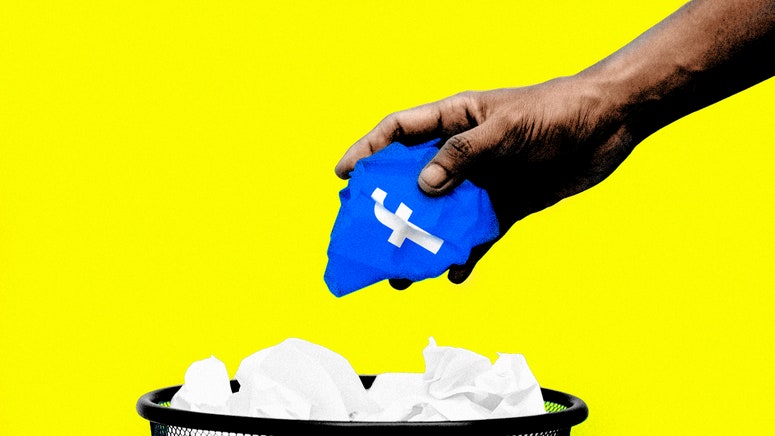 If you've finally hit your breaking point, here's how to say goodbye to Mark Zuckerberg's empire.

I have 975 Facebook friends, accumulated over the past 13 years or so. I “like” 15 pages, a list that primarily comprises news outlets, plus a few friends who converted their profiles into Pages, and Cheez-Its, for some reason. (The reason is that Cheez-Its are delicious.)

You might imagine that in a healthy social network, even in chronological mode, the ratio of posts from friends to brands would roughly reflect the proportion in which you follow them. You don’t even have to imagine, actually; chronological Twitter functions basically like this, with ebbs and flows throughout the day that map the real human activity of the people you follow.

On Facebook? It’s brands all the way down. I’ll give the caveat again that everyone’s News Feed is their own curated experience, mileages vary, etc. But I’m also at the crossroads of most demographics that, according to a recent Pew Research study, say they use Facebook the most. If nearly 1,000 of my closest friends aren’t on here, who is?

Brands! In my case, media brands specifically, since that’s the majority of my follows. On a recent morning—granted, it was early, around 8:30 am ET—I scrolled through 35 consecutive posts before I hit my first entry by a human, which happened to be from a person I don’t remember sharing a video of Elvis impersonators. Needless to say, this is nothing like the experience of firing up Facebook’s algorithmically curated News Feed, especially if you’re an infrequent customer. On that Facebook, friends are everywhere! They abound. They’re at the pumpkin patch, they’re having a date night, they’re excited about Succession. They’re playing sitar at the Montclair Art Museum. It’s not a bustling metropolis, but it’s no ghost town either.

But is it … better? I’m not so sure. The chronological News Feed may not feature many of my acquaintances, but that effectively turns it more of an RSS feed than a social network. There’s something to be said for that experience; I saw interesting stories—Ralph Ellison on jazz!—I wouldn’t have encountered otherwise, because they garnered too few likes and comments for Facebook to thrust them in front of my eyeballs. And while the timeliness of those stories generally doesn’t match that of Twitter, it’s a more comfortable way to get caught up on the news.

The ranked News Feed undoubtedly gives you more faces you recognize, but the difference isn’t quite as stark as you might think. Again, it feels like not many people are posting to Facebook these days, no matter what mode you’re in. A high-engagement post from someone you barely remember doesn’t really register. And of the posts I was genuinely interested in—often up to four or five days old—I’d already seen a high percentage on Instagram.

The most interesting part of using News Feed chronologically, though, may be the reminder of all the things the Facebook algorithm chooses not to show you in the normal course of use. Take the news: When Colin Powell died, the story dominated chronological Facebook, post after post from media outlets saying largely the same thing. Repetitive? Sure. But at least I knew my full range of options, instead of letting Facebook’s algorithm anoint the One True Obit and shuffle it into a deck of posts from friends and non-alcoholic beer companies with big marketing budgets.

I also realized just how much of Facebook’s volume seems to be propped up by a handful of people. Again, mileage varies, and maybe the friends in your circle are still popping off in the News Feed like it’s 2008. But at any given moment the bulk of the posts appearing organically in my feed were from the same half-dozen people, none of whom I’m especially close with. (To be clear, I support their choice to post, and am glad to know my former coworker’s mom seems to be thriving.) That scarcity does allow for moments of serendipity; I’m not sure my regular News Feed would have served up the neighborhood group post that read, in full: “Anyone have a adult/mens large Luigi costume they would be willing to sale? Mario is not acceptable-has to be Luigi.” That one made my morning.

A common worry that has cropped up around the chronology discussion is that the News Feed would feel too spammy or cluttered without Facebook’s curation. Not so much! Not only for all the reasons mentioned above, but because Facebook currently appears not to insert sponsored or recommended posts artificially into your timeline when you ditch the algorithm. On the regular News Feed, every fifth post is some sort of ad. I don’t miss those one bit.

Using a chronological News Feed hasn’t made me want to get on Facebook more. But it hasn’t made me like it any less. Besides, I eventually realized that I’d been thinking about this all wrong. The algorithm is there to show you who Facebook thinks you are, but also to hide what Facebook knows it is: a little empty, a little sad; a place where a few voices get most of the attention, no matter what it is they have to say.