As Cities Curb Surveillance, Baltimore Police Took to the Air

In August 2016, a Bloomberg report revealed a secret aerial surveillance program in Baltimore led by the city’s police department. Over eight months, planes equipped with cameras collected over 300 hours of footage, used by the police to investigate alleged crimes. Hardly anyone outside police department leadership and the vendor, Persistent Surveillance Systems, knew.

Baltimore’s police commissioner at the time, Kevin Davis, defended both the planes and the secrecy. The city’s murder rate was spiking, the stretched police department was responding to thousands of calls per day, and footage from the planes was helping police find suspects.

The planes were grounded amid backlash from residents and civil liberties groups, who called for the immediate suspension of the program and details on what data the city had been collecting. Commissioner Davis was eventually fired after failing to curb the city’s homicide rate. His replacement, Darryl De Sousa, resigned in a tax evasion scandal. The next year, Mayor Catherine Pugh resigned in a separate financial scandal.

Four years later, the planes were back in the air, but under different circumstances. In 2019, Persistent Surveillance Systems CEO Ross McNutt pitched the city on restarting the program. By flying over a 32-square-mile portion of the city, the planes could monitor the city’s most troubled areas, the sites of 80 percent of the city’s gun homicides. Funded entirely by donors, McNutt pitched the planes as an inexpensive but game-changing tool to curb the rising murder rate.

The new program, dubbed Aerial Investigation Research (AIR), underwent public comment and found robust support among the city’s Black and religious communities. The city’s Board of Estimates approved it in April by a vote of 3 to 2. The planes began flying in May for a six-month pilot that ended in October.

The current police commissioner, Michael Harrison, supports the program. “If it doesn't work, you have my commitment that we will ground the planes,” Harrison said at the April Board of Estimates meeting.

Some activists, including the ACLU, still oppose the program. They say the transparency is immaterial as the planes are inherently invasive and unconstitutional. “The problem with what happened in 2016 wasn’t that it was done in secret, it was that it was done at all,” says David Rocah, senior staff attorney at the ACLU Maryland.

The reemergence of Baltimore’s aerial surveillance program comes at a moment of increasing scrutiny on policing. Local governments are restricting police technology. City leaders in San Francisco, Oakland, and Boston approved restrictions on police use of facial recognition as major vendors like Amazon and Microsoft placed temporary moratoriums on sales of the tech to police. California has passed two privacy laws in the past two years, while Michigan voters endorsed new rules around police access to suspect data.

Baltimore’s increasing murder rate, however, marks the city as an outlier. Residents have long complained of a complicated cycle of violence in the city. Robust police responses can trigger violent backlashes, while passive approaches frustrate residents, who feel ignored. The revolving door of police commissioners has contributed to a lack of trust in police, which frustrates authorities, who complain they can’t solve crimes without the help from potential witnesses. These same witnesses feel police are powerless to protect them from retribution. All the while, murder rises.

“I understand the fears of people who live in Baltimore because I live in Baltimore,” Rocah says. But, he adds, “if that's a sufficient justification for this, then the Fourth Amendment is completely irrelevant.” 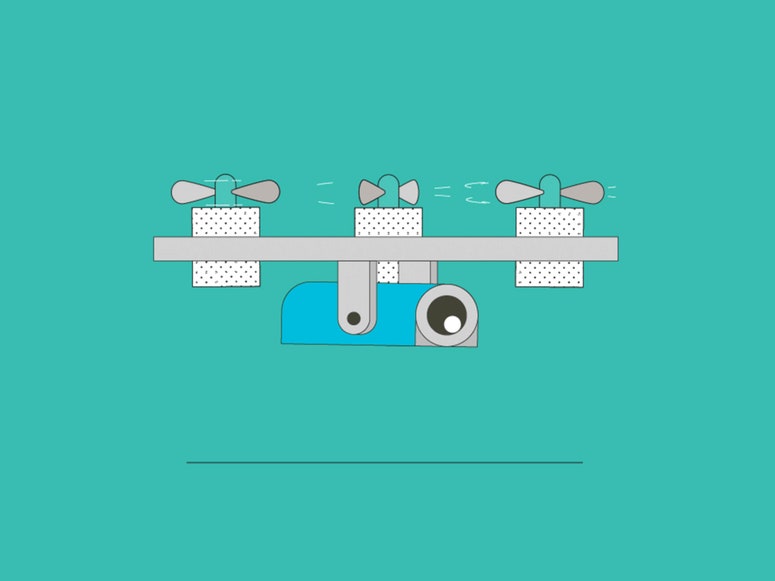 The WIRED Guide to Drones

These tiny flyers are going to fill the skies, transforming entire industries for the better—and worse.

In April, the ACLU filed a complaint against the BPD, arguing that the ongoing, warrantless nature of the program violated Fourth Amendment protections against unfair searches. Three times since then, judges have ruled against the ACLU, and allowed the program to continue.

In the current program, the planes can only fly during the day and BPD can only pull footage from them in connection with certain crimes: car jackings, armed robberies, and homicides.

The footage pulled from AIR cameras render pedestrians as dots on a map. BPD must correlate these “dots” with other information to identify people. For example, analysts can note a “dot” in the area of a crime at say, 3:30 pm. They can tag and follow that dot both forwards and backwards in time, noting when the person may have crossed paths with a street level surveillance camera or been in a car that passed a license plate reader. Baltimore police have access to an estimated 800 city-owned cameras.

Judge Roger Gregory dissented in the 2-1 ruling, arguing that AIR in conjunction with other tech are the real threat to privacy. “This court should not invoke the tragedies imparted by gun violence in Baltimore to justify its grant of sweeping surveillance powers to the BPD,” Gregory wrote. “The AIR program does, indeed, amount to long-term surveillance that compiles ‘a detailed and comprehensive record’ of a person’s past movements.”

Rocah, the ACLU lawyer, says the technology “is being deployed for one and only one reason—to identify people.”

BPD hasn’t said whether it wants to resume the flights, but pointed to a September “midterm report” on the program. Police used evidence from the AIR program 81 times between May 1 and July 31. Of those cases, 21 percent ended in arresting a suspect. Over the same period, looking only at the types of crimes where AIR could have been used, only 16 percent of cases ended in arrest. In a statement, Baltimore police said it’s too early to draw conclusions about the program.

Last week, the ACLU asked to reargue the case before a larger panel of appeals court judges. Win or lose, Rocah says the future of the program hinges on the city’s incoming mayor-elect, Brandon Scott. Scott voted against the AIR program during the spring Board of Estimates meeting and may be a deciding factor in its future. He did not respond to a request for comment.