NFTs Are Hot. So Is Their Effect on the Earth’s Climate

Two years ago, Joanie Lemercier, a French artist known for his perception-bending light sculptures, took on a new role as a climate activist. He attended protests against coal mining, projecting lasers onto excavators and government offices with dramatic effect, and began a campaign demanding Autodesk stop selling its design software to fossil fuel operations. He also took a closer look at his own energy use, which included a hefty heating bill for his studio in Brussels, electricity for the high-end computers to render his creations, and dozens of flights each year to exhibitions around the world. He tracked it all down to the watt and vowed to reduce his energy use by 10 percent each year, a goal he had successfully met. Then, a few months ago, in the course of a few minutes, his progress was erased.

The culprit was Lemercier’s first blockchain “drop.” The event involved the sale of six so-called nonfungible tokens, or NFTs, which took the form of short videos inspired by the concept of platonic solids. In the clips, dark metallic polyhedrons rotate on loop and glisten—a reference to Lemercier’s installations in the physical world. The works were placed for auction on a website called Nifty Gateway, where they sold out in 10 seconds for thousands of dollars. The sale also consumed 8.7 megawatt-hours of energy, as he later learned from a website called Cryptoart.WTF.

That figure was equivalent to two years of energy use in Lemercier’s studio. Since then, the art has been resold, requiring another year’s worth of energy. The tally was still climbing. The problem, as Lemercier saw it, went well beyond himself. His fellow artists were becoming millionaires overnight as the cryptoart world exploded. But so was their role in emitting carbon. Artists didn’t seem to understand the scope of this problem—Lemercier himself hadn’t—and the platforms making the sales didn’t seem interested in clarifying.

Cryptoart, or NFT art—the field’s practitioners haven’t quite settled on the terminology—is having a moment of massive, headline-grabbing sales. Last month, an animated image of Nyan Cat, the popular meme of a rainbow-shooting feline made out of a Pop-Tart, sold for $660,000 in a blockchain sale. The latest bid in an ongoing Christie’s auction for an NFT by Beeple, an artist known for his playfully grotesque takes on current affairs, is $3.5 million. But those are just the tip of a rollicking industry. Works by lesser-known artists routinely sell for thousands of dollars, and a booming subgenre of TikTok videos advise viewers on how to quickly flip them for a tidy profit. The numbers hardly make sense to anyone, and the same has been said of some of the artwork listed for sale. But that was also recently true for the prices of GameStop stock and Dogecoin. It’s a strange, heady time for digital speculators.

Still, there are signs of substance underneath it all. “It’s easy to look at NFTs and say, OK, this is Beanie Babies,” says Jill Carlson, a venture capitalist who invests in blockchain technology. That had been her own stance for years, when the NFT art world was defined by Cryptokitties, collectible cartoon cats that briefly sold for tens of thousands of dollars. (Ridiculous then but pennies compared to now.) She changed her mind recently after seeing the interest of artists who had established themselves independently of blockchain hype—people like Lemercier. Some of the NFTs Carlson saw even looked like actual art. “The prices are still totally outrageous,” she adds. But both things can be true at once.

For digital artists, the attraction of blockchain is a new model of ownership. Crypto art is no more secure from copycats than anything else posted on the internet; a person could easily record a video or screenshot an image and proudly display the replica on their desktop. But with an NFT, the owner buys a verified token providing digital evidence that the art is theirs—a bit like an artist’s signature. The idea is to offer some semblance of the authenticity that is naturally bestowed on physical art. After all, most people would say that a perfect copy of a Mondrian abstract painted on your garage door is not the same as the one created by the artist. Why couldn’t the same be true for a .CAS file? A bonus of the model is that ownership can be extended to resales of that token, allowing artists to continue receiving a cut.

The trade-off is that this model consumes lots of energy. The major marketplaces for NFT art, which include MakersPlace, Nifty Gateway, and SuperRare, conduct their sales through Ethereum, which maintains a secure record of cryptocurrency and NFT transactions through a process called mining. The system is similar to the one that verifies Bitcoin, involving a network of computers that use advanced cryptography to decide whether transactions are valid—and in doing so uses energy on the scale of a small country.

How exactly that energy use translates to carbon emissions is a hotly contested subject. Some estimates suggest as much as 70 percent of mining operations may be powered by clean sources. But that number fluctuates seasonally, and in a global energy grid that mostly runs on fossil fuels, critics say energy use is energy use. Some mining hotspots popular because of cheap hydropower, such as Missoula, Montana, have banned new operations over concerns that even “clean” mining would push neighboring energy users to dirtier energy sources. Ethereum’s developers have planned a shift to a less carbon-intensive form of security, called proof-of-stake, via a blueprint called Ethereum 2.0. But this has been in the works for years, and there is no clear deadline for the switch.

“If you look at how much energy we are going to spend in the meantime, it’s ridiculous,” says Fanny Lakoubay, a crypto art collector and adviser. Ethereum became the platform of choice for digital art sales because it was designed to handle digital transactions that go beyond cryptocurrency, using a system called smart contracts. And as the second-largest blockchain platform after Bitcoin, it was known to be fairly reliable, with an established community of developers. There are alternative blockchains, some of them already using proof-of-stake, but they are perceived as less established—and perhaps less permanent, Lakoubay explains. That makes them less appealing to art buyers who want their claims to very expensive things etched in digital stone.

Until recently, the NFT art world hadn’t given energy use that much thought, Lakoubay says, because the community of artists and collectors was tiny. Digital art sales weren’t driving the computers that ran Ethereum; that was due to other things, like cryptocurrency speculation. Lakoubay has been happy to see the recent growing interest in crypto art. But it was also a little bit scary. “I’ve been advising collectors to not be too crazy right now,” she says. “It’s definitely not the art market that’s driving the prices.”

Adding up the Energy Use

Lemercier knew that energy was involved in anything blockchain, but he was unsure of the impact of issuing a set of artworks and struggled to find information. Surely, he reasoned, a handful of transactions wouldn’t amount to much, especially compared with his usual process of creating and shipping physical objects. And the possibilities were tantalizing. He liked the new model of ownership, which seemed to have fewer barriers to up-and-coming artists than the traditional art market. So Lemercier struck a compromise: heating was by far the biggest energy cost in his studio, so he would invest a portion of his crypto proceeds in better insulation.

The experiment attracted the attention of a friend and fellow technology artist named Memo Akten, who was concerned to see his climate-conscious friend getting involved in blockchain. Did Lemercier really know the full ecological costs? Akten decided to trace the blockchain activity associated with 18,000 NFT artworks. The energy use was more complex, he found, than simply adding a token to a blockchain (a process called minting). There were other transactions to consider: the dozens of bids an artwork might receive, for example, and resales in the fast-flipping NFT market. Plus some artists were issuing multiple “editions” of their works, driving energy use even higher. Lemercier had issued six NFTs, but 53 editions. 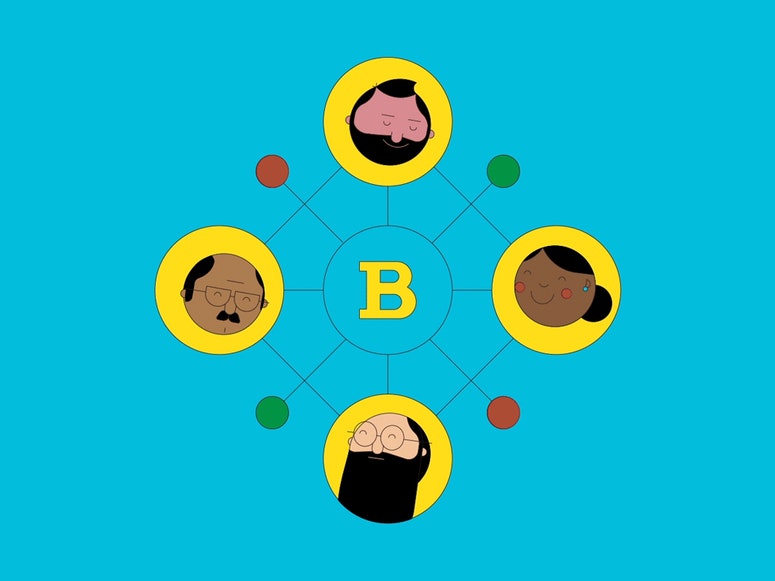 The WIRED Guide to the Blockchain

It's super secure and slightly hard to understand, but the idea of creating tamper-proof databases has captured the attention of everyone from anarchist techies to staid bankers.

By Klint Finley and Gregory Barber

The realization led Akten to create Cryptoart.WTF—a kind of roulette game that selects a work of cryptoart and presents a rough estimate of the energy use and emissions associated with it. The intention of the website is not to shame artists, Akten says, but rather the platforms that oversee the sales. He and Lemercier want the NFT marketplaces to adopt more efficient technology—either tools that handle more aspects of the transactions separately from the blockchain, or leaving Ethereum behind for other blockchains that don’t use mining.

John Crain, the CEO of SuperRare, a leading NFT marketplace, says it’s flawed to equate blockchain transactions with carbon emissions, and says the website sensationalizes the issue by trying to attach a specific energy use figure number to an artwork. He compares Ethereum to an airplane that will take off regardless of how many cryptoartists climb on board. “There is a whole ecosystem of people who are creating emissions, so I don’t think it’s fair to the artists to say that you created this amount of CO2,” he says. And what of the carbon emissions associated with the traditional, physical art world? Everything from the flights and shipping of sculptures in crates to the gallery lights and security systems.

Crain says he shares the broader concerns about emissions, especially as the blockchain art market grows. SuperRare is looking into options for making the transactions more efficient, he says—though many of them involve security trade-offs. The debate has made him more eager for Ethereum 2.0, he says.

That response has not quelled the frustration of artists like Akten and Lemercier. “People say that hopefully it will be fixed in a year or two so it’s OK to be exploitative right now,” says Akten. And while there are certainly carbon emissions associated with the traditional art world, if the point of blockchain art is to imagine something radically different, he wonders why avoiding climate destruction wouldn’t be at the top of the priority list. “We have to change our existing habits,” Akten says. “So how can we build new platforms that are unsustainable?”

After learning about his carbon footprint, Lemercier canceled two planned drops, which had been tentatively priced at $200,000. He says he can understand why artists are carrying on. “I do understand why they want to surf the wave because they could be set for life,” he says. But recently, he had been seeking out alternatives. He had tested out a sale on a platform that is already proof-of-stake, and it went well. It didn’t have the same volume of artists and buyers, but he wondered if he could get artists to migrate en masse and drum up interest. Perhaps a prominent artist would cancel a major Ethereum drop in solidarity to join them.

In the meantime, Lemercier was happy to be reentering the physical art world, which was getting easier as pandemic restrictions eased. Last week, he opened a solo show in Madrid. He took the train.