Brood X Cicadas Are Here! We Got Up Close So You Don't Have To

From a distance, the trunk of the big maple appears to be plastered with brown leaves, or perhaps a bad case of acne. But get closer and the bumps form a caravan of living creatures, all doing their best to climb to safety in the branches above.

These are cicadas that have just come out from subterranean exile, hunkered down for the past 17 years, sucking sap from tree roots as they matured a foot beneath the soil. Today is their big day, their “emergence,” as entomologists call it. After a cold spring, the soil temperature here in suburban Silver Spring, Maryland, has reached 64 degrees: go time. The sun is out and juvenile nymphs crawl out of their holes, look for the nearest tall object—a tree, bush, or piece of patio furniture—to climb. Then they wait as their bodies grow stronger and harden into the mini-Hulks of the insect world. Within a few hours, the cicadas have shed their brown shells and morphed from juveniles to adults. Their bodies darken, their eyes turn a bloodshot red, they develop a set of powerful coppery wings and a desire to mate as quickly as possible.

Across 15 eastern states, the same ritual is underway. Billions of cicadas are emerging this week from Brood X—a population of three separate species (two from the genus Magicicada) that emerge from the ground at the same time. There are a dozen broods of 17-year cicadas and three broods of 13-year cicadas in the eastern US, each appearing in different years. But Brood X (entomologists use Roman numerals) is among the largest and lives the closest to big population centers, like the region between Washington, DC, and New Jersey, and stretches west toward Ohio and Indiana.

Zoe Getman-Pickering, a postdoctoral scientist at George Washington University, is one of a handful of cicada researchers who are taking advantage of the six-week emergence to get as much information as they can about the insects’ weird lifestyle, their unusual gut microbes, and how the massive population boom ripples throughout the eastern forest and suburban ecosystems. Dressed in comfortable jeans and a khaki hiking shirt, and carrying a clipboard and binoculars, Getman-Pickering strolls through a local nature preserve looking at thousands of hatching cicadas.

She has some empathy for their struggles. Like humans after more than a year of Covid-19, they, too, are getting used to being in public again. “After the pandemic, it’s something a lot of people can relate to,” Getman-Pickering says. “They’re coming out to the sunlight blinking, all a little clumsy and awkward, trying to get back into the world.”

She picks up a just-emerged adult and checks its underbelly to see if it's male or female. Females have a pointy “ovipositor” to lay eggs; otherwise they all look the same.

Getman-Pickering and Grace Soltis, an undergraduate at the University of Maryland, are not just interested in insects—they are also recording which types of birds are feeding on this unexpected bonanza. “What we are predicting is that with all the cicadas coming out, there’s a huge amount of easily available food for the birds,” says Getman-Pickering. “Why do all the work of finding tiny caterpillars when you can get free all-you-can-eat tree shrimp?”

She says bird populations skyrocket as they switch from their normal prey of caterpillars and other small insects to this new buffet. More food for the birds means a better chance of reproduction, and—later—more baby birds.

Indeed, less than an hour after the cicadas have begun their crawl up the big maple, a pair of downy woodpeckers, several tree sparrows, and a crow swoop in and start to feast on the smorgasbord. And it’s not just birds, Getman-Pickering says. “Every animal is eating the cicadas, including rats and dogs if they are not kept in check,” she says. People too.

Getman-Pickering spends every day in the field collecting data from sites in suburban Maryland, another more rural wooded area, and a control site without cicadas near the Chesapeake Bay. By comparing their populations of birds and caterpillars, she hopes to sketch out ecological patterns that might remain long after the few weeks the cicadas will be around. “When the birds stop eating caterpillars,” Getman-Pickering says, “the populations of the caterpillars will explode and will potentially do more damage to the trees. We also expect the population of parasitic wasps will increase. They eat the caterpillar inside out, saving the vital organs for last.”

How the cicada emergence shifts local food web patterns is just one question that researchers are trying to answer. From a forested area along the border between Georgia and Tennessee, Chris Simon is watching her third Brood X emergence since she began studying them as a graduate student in 1974. Simon, a professor of ecology and evolutionary biology at the University of Connecticut, wants to know why and how they come out all at once. Simons believes that the 17-year cycle evolved to give the entire brood a better chance of surviving and reproducing by overwhelming predators with their sheer numbers. But nobody is sure yet what mechanism they use to count that 17 years.

She is mapping the timing and precise location of their emergence, and hunting for a genetic switch that might be common to all three species. “We think that there’s some kind of modification of the DNA that accumulates over time,” Simon says. “Once they get a certain amount, there’s some kind of trigger for a cascade of chemicals that are released.” This chemical would tell the insect that it’s time to finally go outside. 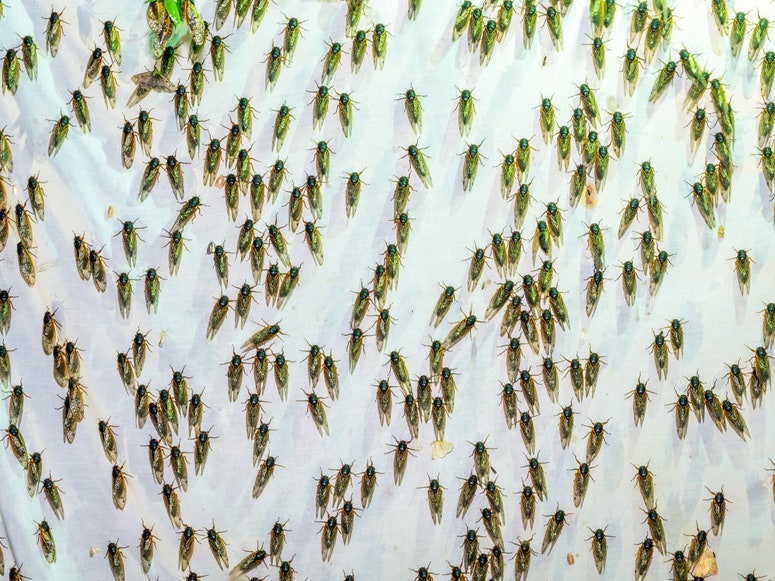 The Cicadas Are Coming. Let’s Eat Them!

Why not embrace Brood X as the free-range, sustainable source of protein that it truly is?

But there’s another theory: It’s also possible that the cicadas have a way of marking the growing season of the trees they are feeding on during their time underground. And thanks to a warming climate, the length of the growing season in this part of the US is getting longer. This, in turn, is shifting some of the 17-year cicadas to emerge after only 13 years because they are maturing more quickly. “Brood X could disappear in the DC area and we could eventually see all of the cicadas in the DC area convert to 13-year cicadas,” she says. Simon adds that has already occurred in other areas of the country, such as the Upper Mississippi Valley and around Chicago.

Students in Simon’s lab are also tracking a symbiotic microbe that lives in the insect’s gut and provides it with vitamins and amino acids that it can’t get from tree sap. This microbe is a bacterium that was once a parasite of the cicada. Simon says the cicada is trapped in a 17-year cycle that has forced it to make unusual adaptations like living with this symbiont. “We just don’t know how big of a burden it is on the cicada,” Simon says. “It is weird.” And this co-evolution appears to be ongoing. The microbe’s genome is starting to break down into smaller pieces of genetic material during cell division, making it more difficult for the host to pass on the symbiont to its fertilized eggs.

These microbes aren’t the only passengers carried by cicadas. Other researchers are trying to figure out why a toxic fungus infects about 10 percent of the ones that live in forested areas. The Massospora fungus, which was discovered in the 19th century, destroys the insect’s abdomen, affects its brain and causes them to try to mate with other males, spreading the fungus to other individuals.

Because Brood X appears only once in a generation, and because there are so many mysteries to resolve, scientists want to harness the observation power of a curious public. As this summer’s brood emerges and begins their chorus of mating songs, they say people can help collect data by describing bird predation through the Brood X Bird Feast website, or marking where individuals emerge through the Cicada Safari smartphone app.

Scientists are also deploying a more advanced system that uses sound recorders and a data logging system developed by John Cooley, a cicada expert at the University of Connecticut. Cooley and his team have been driving around listening for the sounds that indicate the beginning of the insects’ mating period. This chorus can help them determine the boundaries of a specific population. Cooley says he drives until he doesn’t hear them anymore, and then marks that GPS location in his laptop. Figuring out the exact boundary of where they live is important to understanding how Brood X’s territory may be changing over time.

Cooley says the overall weirdness of these 17-year cicadas is also a good reason to study them. “The one thing that Darwin exhorted us to do is look at the oddballs, the exceptions,” he says. “Because those are the ones that are really interesting.”