What if Shopping on Amazon Was Just … Better?

On Amazon’s 20th birthday, in 2015, the megalodon of ecommerce celebrated the way most 20-year-olds would: by having a giant garage sale.

OK, so maybe most 20-year-olds don’t celebrate their birthdays by having a garage sale. But Amazon says on its corporate blog that the impetus for the first ever Prime Day was to celebrate that milestone birthday and to “continue to innovate on behalf of the customer.” In reality, Prime Day was actually a clever scheme for Amazon to clear its channels of excess inventory and to manufacture a shopping holiday that has grown big enough to rival Black Friday and Cyber Monday.

Now another Prime Day, or days—Monday and Tuesday—has come and gone. And in the US, our pandemic panic purchases from a year ago have given way to grill kits and vacation sunnies. Maybe now is not the best time to judge anyone for bargain hunting for an Oxo dish brush or sports gear that your kid has had their eye on. But it’s fine to judge Amazon. Because what if shopping on Amazon was just better? Or if Amazon, in a kind of quarter-life crisis, decided it wanted to help you unload your stuff instead of buying more stuff?

That’s one of the lofty premises behind Amazon After, a concept app created by experimental designer Scott Amron. Amron’s past concepts include everything from a mashup of a water fountain and a toothbrush to elegant fridge magnets to fruit labels that dissolve into soap. (He also does design work for larger companies.) Amron doesn’t want to redesign the entire shopping experience on Amazon’s website, despite valid criticism that Amazon.com has become a “fractured marketplace,” a confusing mess of Amazon private-label products mixed with third-party items. Amron just wants to redesign resales on Amazon.

About six years ago, an unused coffee maker—a gift sent to Amron and his wife via Amazon—got Amron thinking about new ways to “sell, donate, recycle, or even rent out stuff you bought on Amazon, to help keep your things out of landfills.” The emergence of the internet of things, the inevitability that our products will all be connected someday, helped crystallize the idea for Amron: Since so many products connect to apps, it wouldn’t be all that hard to keep track of a product’s lifespan, its usage, even its location. He wanted an app that recognized that this like-new coffee maker wasn’t being used, and kept constant track of its resale value. An app that made it super easy to resell it. And what if the platform where the resale takes place was actually Amazon?

Amron got to work building Amazon After and unveiled it publicly just a few months ago. The concept app mimics the look and feel of the current Amazon app, right down to the smiley arrow below the word After. The pitch is this: Amazon already knows what you own—the company collects a stunning amount of data based on both your purchase history and your browsing habits—but something like Amazon After would use that same data to help you resell it. The concept app shows you a total of what every item you’ve ever purchased on Amazon is worth, then suggests “Afterlife” options. People can make offers on your items before you’ve even listed them, which might prompt a resale. You could ask Alexa to initiate the sale for you, i.e., “Alexa, resell my coffee maker." 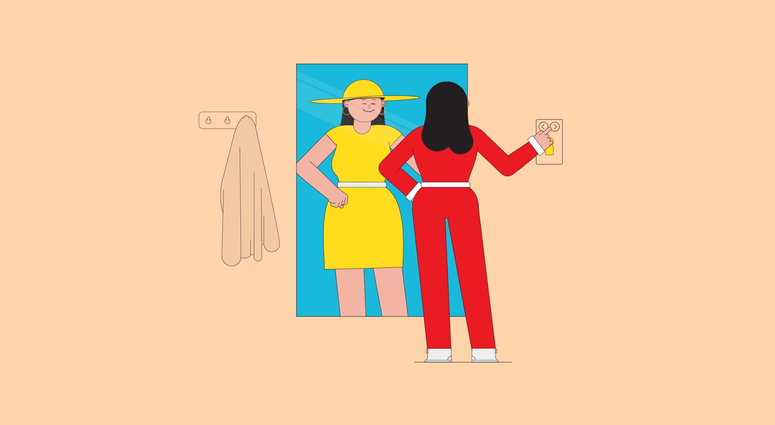 The WIRED Guide to Online Shopping (and Digital Retail Too)

Everything you have ever wanted to know about Amazon, data privacy, and register-free stores.

In Amron’s imagination, the app would serve not just people looking for a good deal on a secondhand item but also people who don’t care all that much for reselling something at top dollar. They “just want to know that it’s not going to go to a landfill,” he says. Putting it another way, Amron notes that Amazon already upsells customers on its services, based on the information it has about your purchases. In his vision of a smarter Amazon, that data would be used for reselling instead of upselling. (You can't download the app yet, but you can sign up on Amron's website to be notified if and when Amazon gives its blessing and allows the app to be released.)

There’s an obvious flaw in Amron’s concept: Trade-ins and resales are technically already options on Amazon.com. In fact, the company has been running a trade-in program since 2011. But the categories of items that can be traded in are limited—think Echo devices, Kindle ereaders, Bluetooth speakers and headphones, and phones and game consoles from select manufacturers. Payment comes in the form of an Amazon gift card, so that the customer can … shop more on Amazon. Products that don’t qualify for trade-in can be sent in for recycling.

Amazon also sells refurbished items, products that have been “professionally inspected,” across a few categories. But sellers have to apply to be an Amazon Renewed seller. And on the buying side, refurbished items aren’t always bargains. A stainless steel percolator from Cuisinart is selling for $69.95 on the Amazon Renewed Store. That matches the price of a brand-new one at Walmart.com and is a mere 4 cents cheaper than the same new percolator on Macy’s website.

What Amron’s proposing is more of an eBayification of Amazon, a peer-to-peer network that lets any Amazon customer, not just approved sellers, unload their vast stores of junk on each other. Amron claims the concept app has gotten some attention from executives at Amazon, but he’s unsure the company will ever implement it. “In my experience, if you don’t provoke, then nothing happens, so I went further with it and fleshed out the concept,” Amron says. And he may just launch a publicly available version of the app in the future, which would require customers to grant permissions to access their Amazon purchase data.

Where Amron thinks Amazon could do better in resale, Nate Faust sees opportunity for smarter shipping. Faust, who cofounded Jet.com and later sold it to Walmart, is hardly suggesting people curb their online shopping. His idea for a better buying experience is to target commerce areas that Amazon’s doesn’t already own and to make delivery of those items more sustainable.

Amazon is the top online retailer in North America by a large margin, but Faust points out that Amazon sales still make up less than half of total online sales in the US, with other retailers making up anywhere from 60 to 70 percent of total sales. Faust’s goal when he launched Olive, his new logistics company, was to partner with fashion and apparel brands—the ones that typically don’t sell on Amazon—to pilot a new kind of sustainable shipping model.

Instead of shipping things to your door in scattered deliveries or an assortment of cardboard boxes, Olive works as a logistics middleman to combine all the goods at one of its consolidation warehouses and ships the package, via USPS, in reusable shipping containers. Olive has an iOS app, but Faust envisions that most people will use it as a browser extension or eventually as an option at the point of checkout on another retailer’s site.

Faust believes that simply consolidating the number of items in a delivery, particularly when it comes to last-mile delivery, could reduce the carbon footprint of each item by up to 30 percent. (Others estimate that supply chain innovation could lower emissions on last-mile deliveries by anywhere from 17 to 26 percent within a few years.) He also thinks that Olive’s approach to consolidation and establishing a set delivery day is ultimately a more appealing option than Amazon Day, a free delivery option for Amazon Prime members that lets them set two preferred days of the week to receive any items they’ve bought. In Faust’s experience, Amazon Day hasn’t always worked as promised, he says, especially if the products are sold by third-party sellers and aren’t flowing through Amazon’s fulfillment centers.

“What we’re doing differently is giving incentives around a premium delivery experience, from the elimination of the packaging and, most importantly, in fashion and apparel, where people want easy returns,” Faust says. Eventually Olive plans to expand into other retail areas, like personal care and beauty products.

Neither Faust nor Amron is an absolutist about not shopping on Amazon. Both just believe that troves of data and logistics expertise can be used more wisely. Amron, of Amazon After, also insists that his goal is not to compete against Amazon; Amazon owns his life, he quips, whether he’s buying home goods from Amazon.com or produce from Whole Foods. And Faust insists that most of the retailers Olive will work with are predominantly brands that aren’t sold on Amazon. We might all be swimming in oceans of consumer products, but even the most idealistic entrepreneurs seem inclined to stay away from the sharkiest parts.